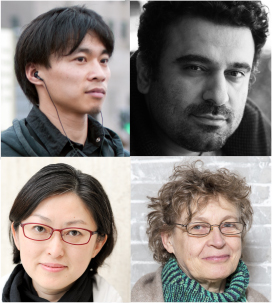 Urban Screen Interventions: What Has Been, What Is, What is Adjacent, and What Might Be

This presentation will share and build upon nearly two years of conversational inquiry, experimental research, roundtable performance, and project development by the Screens Collective, as it works to articulate how the already existing and everyday spaces of urban screens in Shanghai might become sites of public discourse as we enable a more sustainable set of ordinary affects and durations to be recognized in the city. We will thus present a series of ongoing provocations and practices, with the aim of furthering this central concern: What is potentiated, even if not yet overtly expressed, in the infrastructure, space, and language of the urban screen? What other occasions, encounters, and mobilities might we articulate – of what has been, what is, what is adjacent, and what might be?

Certainly, the medium of the urban screen in Shanghai is to this point largely state-entrepreneurial in language and design. Yet this already existing medium of the urban screen potentiates a host of other languages, performances, and potential actions and interactions. Certainly, these screens are part of urban force relations that modulate our bodies, movements, and sensations. Yet there are also moments of other affective and bodily interactions/non-interactions with urban screens. What experiences are occurring that we might not yet recognize as occurring? From here, we ask:

Current practice-based investigations circle around handwriting as a bodily (and intimate public) form of writing whereby the body of the individual is present; adjacent occasions, images, mobilities, or spaces through which to [re]articulate the urban screen; and acknowledgement of the range of infrastructures (both material and affective) that can lead to and from the screen – infrastructures that may also remain unseen, unspoken, and unknown in our “on-the-street” screen experiences.

Projects addressed will include the Screen Bus “On the Way” project, proposed with JC Decaux, as a case study developed out of previous provocations, and whose development has helped us to see the situatedness of municipal gatekeepers for the urban screen, as well as the shared vocabularies yet divergent meanings between artists and Out Of Home screen/advertising industries.

The Screens Collective addresses fundamental questions concerning the potential of urban screens as sites of public discourse. The Collective works to create speculative (as in exploratory, in process, in situ, on the ground) urban screen situations that enable a more sustainable set of ordinary affects, feelings, durations, and sensations to be recognized in the city. They do so by linking, transforming, and reframing urban screens and their experiences within adjacent languages, expressions, mobilities, infrastructures, and fields of attention that reach beyond cultural and national boundaries.

● Petra Johnson is a research-based artist whose interests focus on contact improvisation, pedestrian movement and the role of ordinary affects in everyday life. She regularly initiates interdisciplinary research for a round of related topics. Partners of current projects are the Making Lab/Tongji University and Lijiang Studio in Jixiang Village, Yunan. Her work ranges from choreographic installations to a constantly evolving participatory walking practice (www.walk-with-me.org.uk), the outcomes of which explore poetic approaches to relational mapping: The Constellations Below our Feet.

● Stephanie DeBoer is Associate Professor of Cinema and Media Arts/Studies in The Media School at Indiana University. Her work and research addresses the dynamics of place, space, and location for transnational and urban film, video, and screen media cultures. Often working in collaboration with other artists, critics, and scholars, her approach draws from such arenas as critical media and screen studies, critical geography and infrastructure studies, global/transnational/regional studies, as well as creative practice and digital humanities. She is the author of Coproducing Asia: Locating Japanese-Chinese Film and Media.

● Taqi Shaheen is a filmmaker, visual artist and art educator whose work crosses mediums and defies genre distinctions to fashion witty and curious observations of contemporary Asian cultures and their urban landscapes. He uses hybrid digital video and film formats to research and construct non-fictional narratives in collaboration with various visual artists, musicians and performers. As an art educator, he has been involved with new media art education in China at the Shanghai Institute of Visual Arts (SIVA).

● WU Jie achieved her doctoral degree at the University of Bremen, and currently works as Associate Professor in the College of Design & Innovation at Tongji University. Her research focuses on digital images, algorithmic aesthetics, interactive media design, technology and culture, and so on. She is the author of The Origin of Digital Humans: 1964-2001.

● XU Zhifeng a.k.a. SHAW explores the theoretical and social experience of architecture through performance pieces and art exhibitions that intervene in urban spaces. He studied at the Fine Art College of Shanghai University between 2003-2008 and currently lives and works in Shanghai.