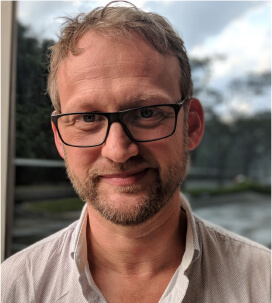 Marc Glöde is a curator, critic and film scholar. His work focuses on the relation of images, technology, space, and the body, as well as the dynamics between fields such as art/architecture, art/film, and film/architecture. He received his PhD at the FU Berlin and taught at the Academy of Fine Arts Dresden, the FU Berlin, Academy of Fine Arts Berlin, and at the ETH Zürich. Since 2017 he is an Assistant Professor at NTU/ADM, Singapore and Co-Director of the MA in Museum Studies and Curatorial Practices. His curatorial work started in the mid 1990s and included the Experimenta Festival 2007 in Mumbai/Bangalore and the exhibition “STILL/MOVING/STILL” (Knokke). Other curatorial projects include his work for art berlin contemporary, (Berlin), the exhibitions “(Re-)locating the Self” (Hamburg), „”Tom Marioni – Actions” (Berlin) and “Tadeusz Kantor” (Edinburgh/Berlin). From 2008 to 2014 he curated Art Basel’s film program. He was co-editor of Umwidmungen (2005), Synästhesie-Effekte (2011) and author of Farbige Lichträume (2014).