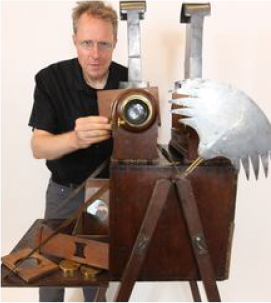 Contemporary cities are mediated spaces in multiple ways. Our eyes are attracted by billboards and screens, many of which are animated. We walk around gazing at our smartphone screens and stop to take snapshots. We listen to music or news as we cruise through the city. Media culture and the urban experience have become woven together in a complex net of interconnections – mediations. How did such a state of being and experiencing develop?

This lecture presents a vision of the mediatization of the urban environment from a media archaeological perspective, covering developments that go back several hundred years. Media archaeology is an emerging approach that explains culture by creating dialogical relationships between different points in time. It is interested in locating issues that have been either misinterpreted or omitted from current histories of media. The urban environment is often taken as a given; little thought is put into its slow and complicated unfolding. A media archaeological perspective to urbanity pays attention to issues like the gradual appearance of visual and textual messages on the walls of buildings and their impact on the inhabitants. The city became, to borrow a concept from Norman Klein, a ”scripted space.” The external changes also affect the ”interior spaces” and processes of the human mind, putting the outsides and insides into dialogue with each other. For media archaeology, the material and the discursive are never separate – they are connected in intriguing ways. The coming of media culture has been a slow process, which has always involved both in varying combinations. One issue that will receive particular attention in this talk is the role of mobility – by walking or other means of mobility we construct the urban space into an interior landscape which is different for each individual.

Erkki Huhtamo works as Professor of Media History and Theory at the University of California Los Angeles in the Departments of Design | Media Arts and Film, Television, and Digital Media. He has lectured worldwide, curated exhibitions of new media arts, and directed television programs. His numerous publications on media archaeology and media arts include a large monograph, Illusions in Motion: an Archaeology of the Moving Panorama (The MIT Press, 2013), and a foundational book on media archaeology, edited with Dr. Jussi Parikka, Media Archaeology: Approaches, Applications, and Implications (University of California Press, 2011). He is currently working on four new books. The first to be published will be ”Dismantling the Fairy-Engine: Media Archaeology as Topos Study.